Today I want to take a look at the TREZOR hardware wallet and why it’s the right device for any hodler, and why it might not be…

TREZOR’s first hardware wallet was launched in August 2014, back in the days when Bitcoin was worth roughly $270. To me, this is critical for two reasons:

Now, beyond the conceptual ideas and opinions about TREZOR, let’s take a look at the latest TREZOR hardware wallet – TREZOR Model T

The first thing I noticed about the Model T is that it’s far better looking than the old TREZOR One, which I found tedious to use and, for lack of a better word, ugly… The Model T has ditched the tedious buttons that were standard with the old TREZORs, which limited security functions, and now comes with a colour LED touchscreen. Yet, it’s actually the packaging that grabbed my attention. 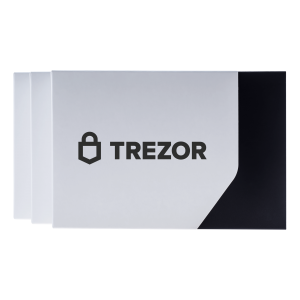 The white sleeve slides off and a magnet seals the inner packaging. You flip the lid and see your brand new Model T in a window, along with setup instructions at the bottom of the lid (there are also a few more details on the back of the box, such as coins supported). One thing that upset me about the unboxing process is that removing the tamper-proof seal was a tedious process and leaves behind an ugly residue – but, then again, it’s a great way to guard against supply-chain attacks, so the inconvenience is worth it.

Then, once I pick up the device, I feel a major difference. It feels larger than the TREZOR One and, therefore, more robust. Then, I start setting it up. The setup is a bit tedious, but exactly the same as with previous models, installing firmware, setting up PINS, passphrases and recovery seeds, yet I love the touch screen. It’s easier to read, with some really nice looking on-screen prompts, than previous models and more accommodating in terms of general UX – something I always value in any device. There are other features, such as a rotating screen, which is also visually pleasing, but doesn’t really serve much purpose.

Then, I start using my TREZOR. I get a simple screen prompt that tells me it’s “locked” – One touch brings up the PIN request and I unlock the device. To receive funds, I open the TREZOR chrome extension and click “receive” where I see a partial address for security reasons. I then click “show full address” and confirm that it’s correct on my device by pressing a green tick.

Sending money involves an almost identical process, except when you confirm the transaction; you have to confirm the value of the money being sent.

What I like about the new TREZOR is that it not only connects via USB, but also with a Micro-SD card, which I think could be very useful in my efforts to keep my cryptocurrency in deep cold storage, as it removes the need for me to plug my device directly into my computer.

With regards to my PIN input, this is where the LED screen really makes a difference. Being able to enter my pin on the device itself, means no malware on my computer can read it. Another great feature is that the PIN entry field changes every time, making it impossible to read tracks on the display. Incorrect PIN entries lock you out for a period of time that increases by a factor of two every time (30 incorrect guesses would take 30 years). Other cool new features include passphrase encryption, which adds a new layer of protection, while you are also able to restore your recovery seed. Then, there comes the matter of Open Source software. The Model T, likes its predecessors, uses completely open sourced software, meaning that I don’t have to place complete trust in Satoshi Labs (unlike with Ledger’s Nano S).

All in all, I find that the Model T has taken TREZOR to a new level. No longer, do we have the boring black and white screen with limited functionality that forces me to conduct most security actions on my computer. Instead, I have a relatively better looking device that let’s me to secure my device on the device itself – a major boost to the overall security. I feel like TREZOR reacted perfectly to some of the criticisms levelled against it over the years. Relying on my computer less and having a device that isn’t an eyesore makes it has made an already-successful product even better.

The Ledger Nano S is one of the most popular devices on the market, but I think it’s incredibly overrated. So let me tell you why you should save your money. So Ledger sold over a million units last year and, for it’s price and simplistic design, has received a lot of praise. The Ledger […]